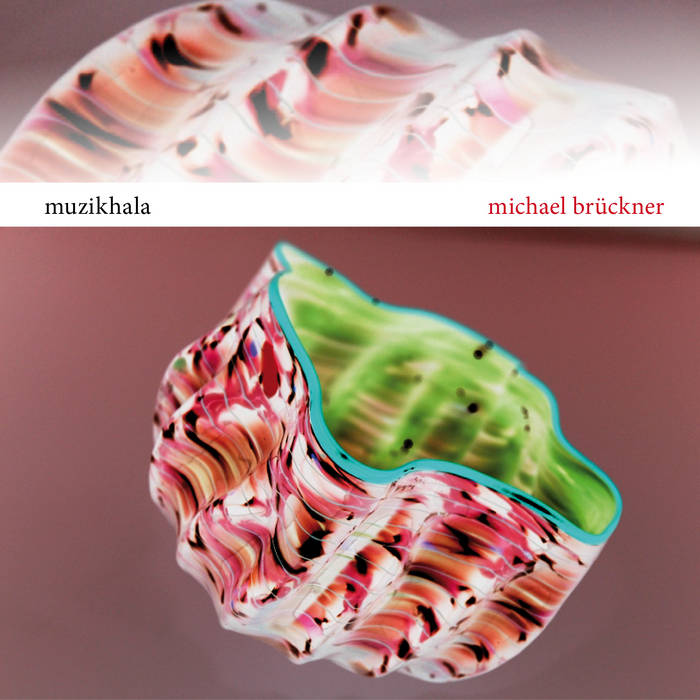 Richard Gürtler "Muzikhala" 3xCDr is a real winner by Michael Brückner, both musically and visually!!! And kudos go also to Mathias Brüssel for his guest appearance. Michael Brückner's composing flexibility is just amazing, but when it goes to my rather zealous die-hard ambient taste, then "Muzikhala" is definitely among my most esteemed recordings by this German soundexplorer. And "Muzikhala - Part 1 (The Aeronaut)" could be a magnum opus!!!

Klaus Müller That's a lot of music and it will take time to listen all and it will take more time to understand. But after the first hour I may say I love it. And I'm lucky about the coming hours with Brückner's and Brüssel's music..

"Muzikhala" is the Chichewa word for serenity.

Chichewa is a language that is spoken in Zambia and Malawi, two countries in South Central Africa.

One possible definition of "serenity" is: the absence of mental stress or anxiety.

Then, "Muzikhala" also is reminiscent of the word "musical"...

During the creation of "Muzikhala", a kind of "storyline" did slowly taking shape. Although probably it may be a different story for every listener, there is a dramaturgy unfolding all through the album; the tracks relate to each other and there a different interconnecting elements.
For this reason I recommend to listen to this music at least once in the original running order. Otherwise, a part of the idea is missed...

Full content of this release (if You opt for the download version, then there are obviously no "CDs" - but You can still think of three "chapters")


Bonus Tracks (please note: these are DOWNLOAD ONLY - also in case of the 3 CD Set)

This album has a little history to it.

In March 2016 a musical friend asked me for an unreleased track, and I visited my large backup hard disc to see if I would find something suitable.

To my own surprise I stumbled upon a complete long track which I could not remember to have ever done. The file was obviously from summer 2014 and stored with the bonus tracks of my album "Ombra - Revisited", but has never been used there. It was named "811" and run some astonishing 77 minutes. I instantly liked it (although it had a couple of mixing flaws and not a lot of musical variety compared to it's length). It is contained as a bonus track in this release...

On the next day, I posted on Facebook about the find and asked people what I should do with it. Someone answered: "Put it on Bandcamp as a free download!"
I thought that might be an option - and then put that track aside, because there were other things to be accomplished at that time.

Some weeks later one evening I remembered that track and gave it another listen. I thought it might be somewhat lazy to just release it as it was, and that it might need a little more variety over it's more than one hour running time. So I added some bass lines and a little bit of piano here and there, and some drums in the middle. This addition shifted the track from a rather abstract soundscape to something more like chill-out.

I liked the result, but also wondered if it might be a bit all-too-friendly, and had the idea to create something like a darker brother, a counterpart to it, which took shape over the following few evenings. This juxtapostion (of a "light" and a "dark" version) also brought a more pronounced sense of storytelling to the material, and I started thinking of it in such terms.

Then, I put these tracks aside again, but found that they kind of kept surfacing in my mind, and after another re-listening session decided to release them as a 2 CD set. I actually did already upload them to Bandcamp at that stage, but didn't publish the album then. However, these two early versions, or mixes, are also part of "Muzikhala", as download-only bonus tracks.

Until that point, I still called these tracks "811", but doubted that it would be a good title. While doing some random online research I then stumbled on that word "Muzikhala" and IMMEDIATELY knew that it had to be this album's title!

However, once this title was found, I felt that the material, when entitled this way, would require some more modifications - it needed more "music" (...more in the traditional understanding of it, and as opposed to "just" some evolving clouds of sounds and morphing chords). So, a while later I did a couple of writing and recording sessions to generate the desired "more musical" material.

While I was working on these parts, the sense of some kind of story taking shape intensified, and I started to realize that some kind of "middle part" would become necessary to lead from the first - mostly serene - part to the darker and more disturbed moods of the second part. So, I started to think of yet another CD, forming this "bridge".

I gave that idea more time to ripen, and remember especially one walk I took and during which I had a vivid imagination of a very violent, noisy, aggressive and chaotic kind of long track, harsh and dissonant, something like a mixture of industrial, metal and free jazz - the complete opposite of the tranquil original "Part 1". For a while I followed this idea - and finally dropped it. However, I think You can still hear a faint echo of it in the final version of "Muzikhala - Part 2".

Instead, I decided to include some tracks which I also had recorded during the first four months of 2016 (but independently from this project - actually, most of them had started as test recordings or musical experiments of one sort or another).
Now I realised that some of them fell into place very nicely when put into the context of the gestalting album - just as if they were meant to constitute that "bridge" I have mentioned before. Most of them however needed different modifications to work as parts of the story which I now could "see" more and more clearly. By which I don't mean it was exactly like the storyline of a book or movie - nothing that definite, but a feeling of some inner coherency that could be "translated" into as many "real" stories as there were listeners who would follow that current.
In some cases, my "proof listeners" (see below) knew - and prefered! - the earlier versions of some of these tracks - therefore, two of them are included as bonus tracks.

Still I felt some more elements were missing: I whished for yet more "musical elements" in some parts of the album; finally I asked my friend and musical partner in "Le Mansarde Hermetique", Mathias Brüssel, for some contributions on slide guitar. While he's no expert player on that instrument, he likes to jam with it and see what happens - and so we did, one evening, in the end not only recording slide guitar, but also some clean "rhythm" guitar parts - and Mathias also played some bass lines and programmed some supporting drum loops which originally were meant only as a rhythmic reference to play guitar to, but in the end too found their way to different parts of the album.

Integrating the results of this session was one of the final tasks in creating the album - and it really turned out to be the icing on the cake, the last pieces falling into place. The puzzle was completed, and the story had unfolded...

At this point, I'd like to say thank You to all those wonderful ladies and gentlemen who volunteered to proof-listen all these hours of material and give me enthusiatic, insightful, deeply personal and very interesting feedback:
Simone, Rebekkah, Anke, Dagmar, Elke and Birgit, Olaf, Gianni, Thomas, Matthias, Hagen, Fabian, Alban, Volker, Christian, Barry, Wolfgang and Mathias - You are GREAT!!!!!! :-)