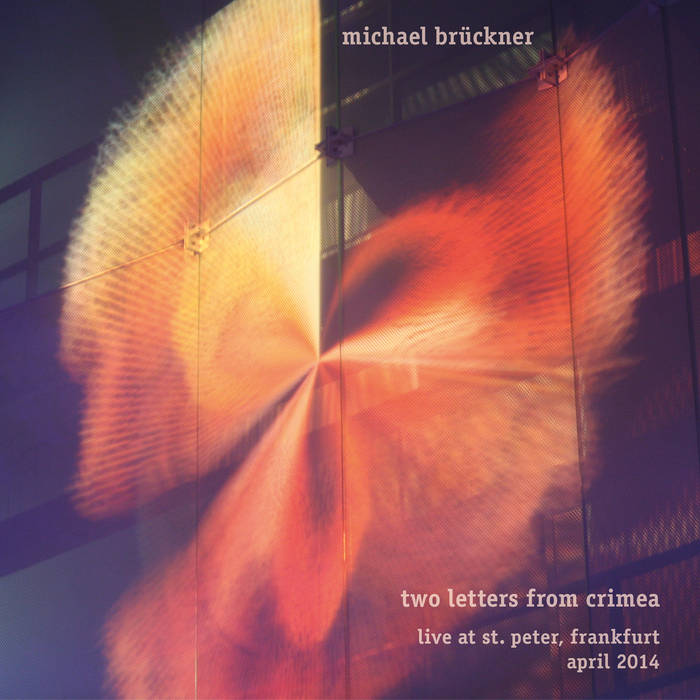 The bigger part of this album is the recording of a concert I played on the evening of the 1st of April 2014 in Sankt Peter in Frankfurt, a former church that has been turned into a - actually very nice - concert hall / event location / cultural center...

My performance there was part of a larger event:
Sankt Peter reuglarily takes part in the biannual, city wide light art fair "Luminale" - featuring the work of many light artists all over the city. Dedicated busses carry visitors from location to location. It's a rather big thing.

A collective of video and laser artists performed at Sankt Peter each evening, and they were looking for ambient musicians to accompaign their light and laser shows. Incidentally, of these VJs is a friend of veteran electronic musician and sound designer Bernd-Michael Land, also known as Aliens Project. Bernd also is one of the founding members of a loose collective of ambient musicians from roughly the Frankfurt area, known as EK Lounge, who gather for open ambient improvisation sessions in irregular intervals. As a result of these contacts, EK Lounge members were invited to perform ; in the end it was agreed that on three evenings, there were two solo concerts, and on the last evening a group session. My turn was the first concert on a Tuesday evening, followed by a great set by Niko Tzoukmanis, aka Microphase. (Opening on Sunday were Patty Stucki, aka Eela Soley, and Bernie, aka Aliens Project himself, on Tueseday we had Chris van Oz aka Amidis and Hans-Dieter Schmitt, aka Imaginary Landscapes...).

All in all, it was a wonderful event, peacful and relaxed, there was an ebb and flow of listeners, some there all the way through, many arriving with the regular busses, staying for some time and then leaving again to visit the next thing. The laser show and light art was beautiful, hypnotizing and technically perfect, the speaker system was a dream, I actually never heard my music sounding live this good (and loud, too...). If I had the option, I would love to perform there once per week...

In one regard, I had to change my plans for the concert, though: I was asked to play no beats and only very atmospheric sounds for the first fiveteen minutes; my opening track though did start with just about five minutes of soundscapes before entering more rhythmical terretory; therefore I picked some of my preferred pad sounds and started improvising with them for ten minutes, with the intention to then go on with my opening track. However, after playing for ten minutes, I was told that the laser artists were ready to start now - and if I could play another ten minutes of what I just did. So I went on...
Since the resulting - totally unplanned and spontaneuos - 20 minute opening improvisation would make the concert recording exceed the running time of a CD, I put it at the end of the actual concert recording (first track on CD 2 on the physical version). Because of the strict timing of the event, I also had to drop one of the track I had intended for the concert, which would have been a seqeuncer based improvisation. The two remaining long tracks are based on the sounds and sequences that I had prepared for that omitted improvisation, but were not used in the end. Actually, I used improvisations during my rehearsals as a basis for them...


The story behind the title and concept of the album:

I never met my grandfather Peter Weigel, my mother's father. Like many men of his generation, he was drafted in world war 2 and send to conquer Russia. From there, he never returned . He was announced "missing" after the battle of Stalingrad.

There's little more I know about him. He was a farmer and woodworker from a small village in the Odenwald (...a low mountain range in the upper south west of Germany, roughly between Frankfurt and Heidelberg). My grandmother (who never married again and passed away in 2003) had only one picture of him, in uniform (poor people in the 1930ies didn't own cameras). And two letters he had sent during his two periods furlough, which he had spent on the Crimean peninsula. I only saw those letters once, when I was still a child...

My grandmother, who lived in our house from my early childhood on, never talked about him; in fact, she was a very humble and silent woman, who didn't talk a lot at all (...also the only religious person in our family - except for me).
I remember at one occasion, in my late teens, I was - like many young Germans of my generation - curious about the political attitude of my Grandfather during the Third Reich; and asked my Grandmother about it. At first, in her usual simple and straightforward way, she just answered that "he didn't like the Nazis". However, I could see that my question set her thinking, and a few minutes later she exclaimed rather unexpectedly:""Those fucking Nazis!", he always said. "Those fucking Nazis, there they sit, bragging in the pub again..." (...actually, she didn't say exactly "fucking" but "Scheiss-" Nazis). That was all, but it was the only occasion I remember her using swear words, and being agitated - and obvioulsy haunted - by bitter memories of that time...

As a child, for some reason I had a strong interest in the history of the second world war, that exceeded the usual fascination for adventurous war games of little boys, and while this faded more into the background over time, the knowledge always remained close behind the surface, and while I'm not brooding constantly over these matters, they come to my mind again now and then.
Eventually, after beginning to dabble in music (at a time, when the tensions between east and west seemed to cease) I started to imagine to one day give a "peace concert" at Wolgograd (the former Stalingrad, where my grandfather - quite likely - had died). This seemed nothing more but a daydream, until an invitation to an ambient festival near Moscow in 2009 (which I couldn't accept,though) made seem such an event more likely.

With the recent Crimean crisis however, that started in the spring of this year, such dreams are threatened by what seems to be a comeback of the cold war. It was at that point when I received the invitation to perform at the church of St. Peter, and immediately this brought all those ideas and associations outlined above to my mind. Basically, I thought while I quite likely won't ever perform a peace concert at Wolgograd, it may be suitable to dedicate my concert at St. Peter to my grandfather, and to peace with, and in, those eastern countries, and the world in general...

Therefore, I dedicate this album to my grandfather, Peter Weigel.

I also dedicate it to the people of the Ukraine and of Russia, and to everyone on this planet
struggeling for peace...

All music written, performed and produced
by Michael Brückner, 2014

all tracks of cd 1 and track 1 of cd 2
recorded live at St. Peter, Frankfurt

bonus tracks are based on recordings of rehearsals
to that concert